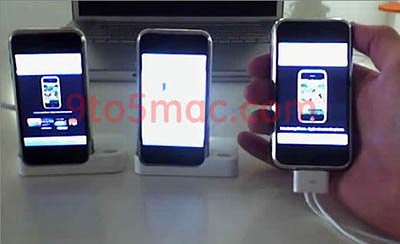 It’s funny that we’re only three days away from the official launch of the Apple iPhone and people are still posting up “spy pictures” of what may be included in the box. It’s actually kind of scary that we have no real idea what the iPhone dock looks like, but we’ve got this “live shot” to go by. That is, if it is indeed legitimate.

With the three lovely iPhones playing nice with one another, we can see that the dock comes with a slot where you can simultaneously charge the iPhone Bluetooth headset, meaning that you have one fewer set of wires to worry about. Interestingly, however, the cabled version that we see on the far right has one major curiosity to it: it has two wires leading out of it.

The last time we saw something like that was with the four-generation iPod. This was because not enough “juice” was being sent through the USB port, so the additional FireWire connection had to come to rescue. Are we going to be back to a dual-wire setup for the iPhone?