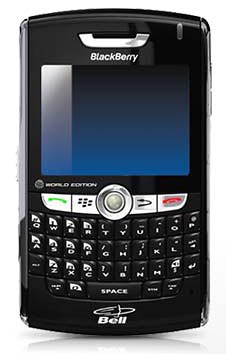 You know, I like I living in Canada. We have universal health care and relatively clean air. Where being a Canadian really bites me in the ass, however, is when it comes to new cell phones, because we’re always the last one on board. Case in point, Bell Mobility has just announced the availability of the BlackBerry 8830 World Edition handheld, a CDMA device that can also accept GSM/GPRS SIM cards for international travel.

Sounds like a pretty hot BlackBerry, right? Especially for business people who are constantly on the move? Well, Bell Mobility is far from being the first to offer the BlackBerry 8830 World Edition because both Sprint and Verizon already have it. I guess better late than never.

In case you missed it the first couple of times around, the BlackBerry 8830 World Edition (this time from Bell) is equipped with GPS navigation (“coming soon”), 1xEV-DO high-speed connectivity, backlit QWERTY keyboard with trackball navigation, QVGA color display, 64MB flash memory, microSD expansion, push email, media player, Bluetooth 2.0, and a speakerphone. Oh, and if you’re hoping to toss in a local SIM, you’re out of luck, because the 8830 only has GSM 900/1800 radios.

The current asking price is $299.95 with a qualifying 36-month contract.