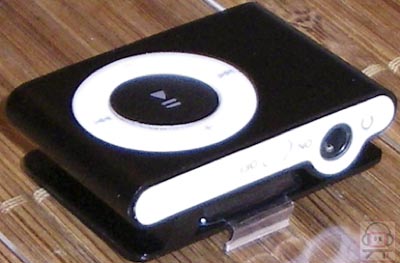 The good news is that this is a real product and not just some cheap PhotoShop job. The bad news is that it is not officially licensed by Steve Jobs’ team in any way. Instead, this iPod Shuffle — complete with authentic looking packaging — is “assombled” (aw, typos are a dead giveaway!) in China by some random OEM.

There are several things that give it away. For starters, the play/pause button is oriented incorrectly. It’s also missing the connector on the same side as the headphone jack. But hey, you’ve got to hand it to these knockoff guys, because they’ve done a pretty good job in mimicking the cheapest iPod available… and then offering in a hot Sharpie-like black that Apple doesn’t even make.

The kicker is that it is only $14, meaning that you can get like five of these or one of the real deal.