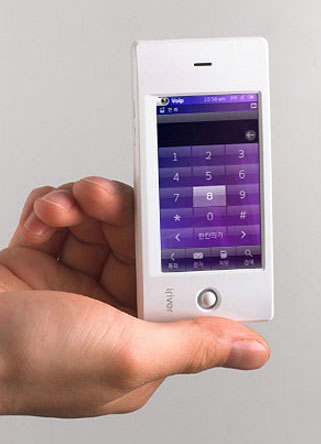 It looks like iPhone clones are literally gushing out from every seam. The iRiver W10 looks a lot like Apple’s freshman foray into the cell phone market, and what’s more, this iRiver handheld boasts full VoIP functionality. That’s right, it’s got integrated WiFi that’ll get you chatting with friends around the world, and it even grants you the ability to simulate GPS (based on your relative location to WiFi hotspots).

As is the norm with iRiver, this is a top notch media player too. The easily pocketable iRiver W10 will handle usual stuff like MP3/WMA audio, MPEG-4/WMV video, and FM radio. The user interface comes by way of a 3-inch touchscreen, offering a calling app that is “similar to the iPhone’s.”

We’re still waiting for more official details, but we can tell you that it has a miniSD memory card slot. Look for an initial launch in Korea with other regions to follow later on.