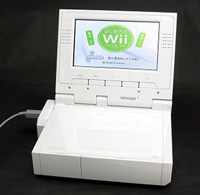 Some of the grandeur of the Wii experience might be lost on you if you use Century’s portable LCD exclusively, but it will certainly do in a pinch, like when that massive screen that you usually use is nowhere to be found.

As you can see from the photo, the screen is no bigger than the Wii console. The screen clips onto the console and can fold down for easy transport. It’s a bit pricey, though, at US$120. It might not lend itself to playing tennis or doing other activities that require to do a lot of gesturing or jumping around, which is basically Wii’s advantage over other, more handheld-based, gaming system. Still, for the Wii aficionado, it’s something to definitely consider.