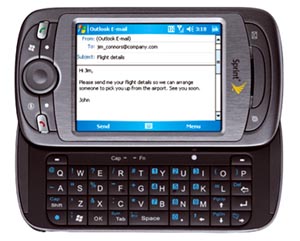 Wait, this phone looks eerily familiar. With a 2.8-inch QVGA touchscreen, 2 megapixel camera, and Windows Mobile, the Sprint Mogul has all the makings of a popular Pocket PC phone. In fact, it’s so popular that Telus Mobility of Canada has their own version called the HTC P4000. And then both of these are more or less CDMA variants of the HTC TyTN and AT&T 8525. One of the key differences is that the Mogul comes loaded with Windows Mobile 6, rather than 5.0.

Going through the rest of thes specs, you’ll find more and more similarities. The Sprint Mogul by HTC, which replaces the PPC-6700, comes equipped with an Intel PXA-263 processor, 256MB ROM, 64MB RAM, microSD expansion, slide-out QWERTY keyboard, and the possibility of an EV-DO Rev.A firmware upgrade a little further down the line.

Personally, I like it (based on my experience with the Telus version). The processor does lag from time to time though, especially when switching from portrait to landscape mode.