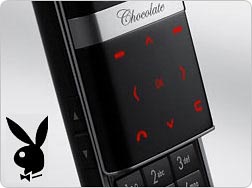 It seems like everyone wants in on the cell phone game these days. We’ve seen Bang & Olufsen make an attempt. Levi’s just took the plunge. And now the world’s most popular “gentleman’s magazine” is going to hurl itself headlong into the world of mobile phones. Hugh Hefner wants a Playboy phone, I guess.

In all likelihood, they won’t be getting a custom design made for the upcoming handset, but it will be custom-branded, meaning that the included wallpapers and ringtones may be a little more risque than what comes with the RAZR. Playboy magazine wants this phone to be a “glossy, upscale device that will reflect the company’s sensual but still tasteful image.”

Three companies have apparently been contacted regarded this project and they are LG (makers of the Chocolate), Motorola (the RAZR-makers), and Siemens. There hasn’t been any confirmation one way or another, but the firm (no pun intended) is leaning toward a GSM-based handheld rather than a CDMA one.