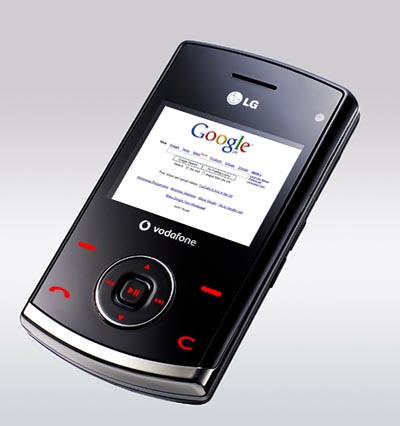 You’ve got to hand it to LG. They’ve done such a fantastic job with the aesthetic design of their Chocolate phone. The glossy black casing, the glowing red touch sensitive keys… it’s all so purdy. Now they have the powerful features and specs to back up those high end looks, because here is the LG KU580 3G video phone. Despite its relatively minute footprint, this slider phone looks like it’s capable of doing a lot of things.

Most notably, the KU580 is getting loaded up with all sorts of Google-powered functionality. Fully compatible with Google mobile service, this Chocolate-esque handset will come with Google Search, Google Mail (GMail), and Google Maps. Based on the provided rendering, the color display has a fairly impressive resolution as well, given that it can show the entire Google front page all in one go.

Although it’s Vodafone-branded, I hope that they ship a North America-friendly version at some point. You know, so that I can review it.