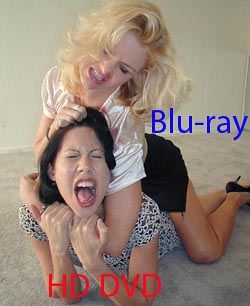 Well, in the United States anyways. According to Digital Entertainment Group, there are five times as many Blu-ray players in the American marketplace as there are HD DVD players. These figures are pretty skewed however. This is because of the 1.5 million Blu-ray players in the States, 1.4 million are PlayStation 3s and only 100,000 are standalone units.

By contrast, there are 150,000 Xbox 360 HD DVD players and approximately the same number of standalone players, bringing the total count to about 300,000. If we compare standalone to standalone, HD DVD has Blu-ray beat. It should also be noted that people who went out and bought the Xbox 360 HD DVD add-on must be particularly interested in the next-gen movie format, whereas people who bought a PS3 might just want the gaming.

So, depending on how you frame it, there is still no clear cut winner in this format war. Normally, competition is good for the consumer; here… maybe not so much.