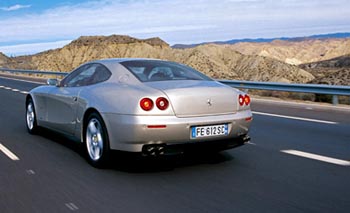 The Enzo probably gets the lion’s share of attention, but Ferrari also has a lot of other fantastic supercars in its lineup. The lucky bugger at Fifth Gear was presented with an opportunity to take the Ferrari 612 Scaglietti for a spin around the block, and let’s just say that the Italian stallion is nothing short of breathtaking.

Buying such a powerful ride comes at a pretty heavy price, however, as the Ferrari 612 Scaglietti retails for over 200,000 GBP. That works out to nearly $400,000 in US greenbacks. Based on this video, it sounds like it’s worth every penny.

A little throttle is like “casting a magic spell.” It’s that fun, that fantastic. There’s a V12 under the hood in the front, it’s rear-wheel-drive, and it does 0-62mph in just over 4 seconds. That’s fantastic for a four-seater, don’t you think?

Depending on your point of view, the paddle-shift transmission can be a bit of downer, but I’d pick one up in a heartbeat. That is, I had an extra half a million dollars kicking around.