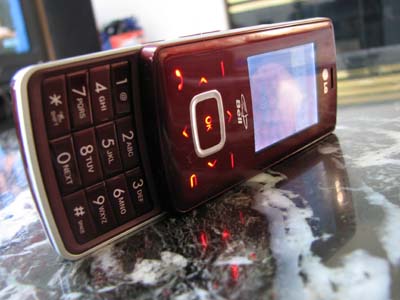 I remember when LG first launched their Chocolate phone in Korea. Everyone thought it was the most beautiful cell phone ever made with its ultra smooth lines, chiclet-like keypad, and those wonderful-looking touch sensitive controls. Now that the LG Chocolate has firmly made its presence felt in North America, the Korean manufacturer has had to step it up a notch. It’s getting pretty competitive in Canada, so in an effort to grab our attention, Bell Mobility has just launched the LG Cherry Chocolate Phone, a deep red variant of the popular slider.

The packaging, while fairly generic in appearance, is good quality. The outer sleeve slides right off to reveal a cake box of sorts underneath. Inside, I found the CDMA-based Cherry Chocolate Phone in all its glory, accompanied by a set of rather standard accessories. Check out the unboxing video for a closer look at the high quality box and the other goodies found within.

The build quality is top notch and I found the spring assisted sliding mechanism to be rock solid. The smooth plastic casing also feels very nice to the touch, but because it is quite glossy, it does tend to be a fingerprint magnet. Only after using the phone for a couple of minutes, the LG Cherry Chocolate had fingerprints all over it. And it’s not like I just had fried chicken for dinner either.

Before we move on, let’s have a quick look at the key specifications and features:

The biggest selling feature of the Chocolate is also one of its greatest pitfalls. The touch sensitive controls feel really cutting edge, but because there is no tactile feedback, it can take some getting used to. I know that I accidentally pressed some of these “keys” on more than one occasion, and this makes for a very frustrating experience. Another major issue with these controls is that they only light up when in use. This is to help prevent accidental presses, but even when the red lights come on to show you where the controls are, they can be difficult to see when you’re surrounded by a lot of ambient light. Taking this phone outdoors on a sunny day, for example, you’ll find that the touch sensitive “buttons” are washed out, so to speak. Then again, if you can’t remember where they are, you probably shouldn’t be using this phone anyways. 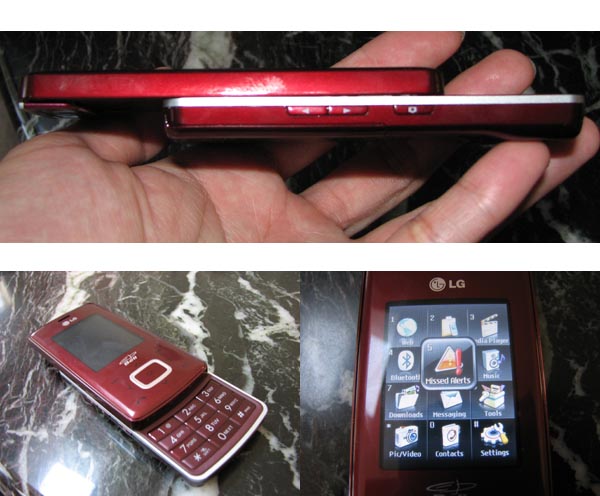 Another thing that I should note is that the “End” button is at a very unconventional location. Instead of being placed on the face of the phone, the “end” button is located along the right side. This makes sense, because you don’t want to accidentally press the end button with your cheek while on a voice call. The numerical keypad is only revealed when you have the phone in its “open” position, and while the keys are quite small, I had no trouble with short text messages and dialing. This is aided by the fact that each key is slightly raised with a small groove in between.

On the main screen, you get the usual set of notifications with signal strength (broken down by EVDO and 1X) in the top left corner, a battery meter on the top right, and a clock/calendar in the center (based on your settings). Like most other phones, you can also choose to have the menu either in a grid or as a list. This is largely a matter of personal preference. Navigating through the menus is pretty standard too, but with the touch sensitive controls, again, it’s easy to have some mis-presses in there.

The integrated media player serves it purpose, but don’t expect the LG Cherry Chocolate to replace your standalone MP3 player any time soon. The sound quality is fine and the multiple equalizers help customize your music experience (3D, concert hall, rock, jazz, pop, etc.), but there are several issues that I had with this phone that made me not so pleased.

The biggest issue is the lack of expandable memory. The Bell Mobility website lists the phone as having 150MB of internal memory, but only about 140MB or so is actually usable. If you’re accustomed to having several gigabytes on your iPod, for example, you’ll find the storage capacity here to be severely lacking. I also didn’t like the fact that the player would not scroll through titles and file names that were longer than what could fit on the display. Lastly, the inability to multi-task — keep the music player running in the background while performing other tasks — made for quite the pain.

In terms of the 1.3 megapixel camera, it’s pretty much what you would expect. It’s respectable for a camera phone but it’s nowhere near as good as even the cheapest standalone digital camera. Don’t expect to take high quality shots with this picture-taker.

In the end, I can’t say that the LG Cherry Chocolate Phone is bad, but I can’t say that it’s a great handset either. From a purely aesthetic standpoint, I was very impressed with this phone. The glossy finish is absolutely gorgeous and the “hidden” touch sensitive controls look great. The smooth lines and bright display are also a very nice touch. At the same time, there are far too many downsides for me to recommend this phone unless you’re only interested in fashion. The touch sensitive controls were frustrating for me and the lack of a memory card slot really is a deal breaker. Maybe if it was free with a two-year contract or something.

The LG 800 Chocolate Phone is available now from Bell Mobility. The Cherry Chocolate (Red) was reviewed here, but it is functionally identical to the black and white variants. The pricing is also the same. The LG Chocolate Phone is currently $79.95 with a three-year service agreement or $329.95 if you want to purchase it outright (though it will only work with the Bell Mobility network).