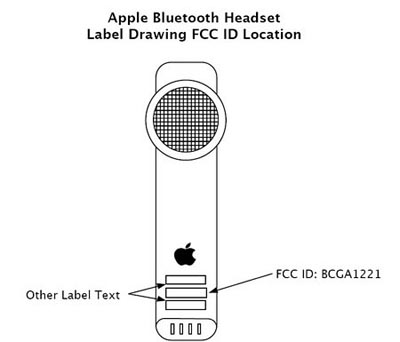 We are less than ten days away from the official launch of the Apple iPhone and it doesn’t take a mastermind to realize that Cupertino is going to milk this device for all of its accessorizing worth. They did it with the iPod, so there really is no reason to believe that they won’t do the same with their freshman foray into the cell phone market.

The first official accessory to hit the FCC offices, the Apple iPhone Bluetooth headset bears a striking resemblance to the first generation iPod shuffle, but with a few notable differences. The earpiece features prominently, of course, as does the Apple logo silhouette. As is the norm with Apple, they’ve kept the design pretty simple, and while the drawing doesn’t say one way or another, this Bluetooth headset is probably going to ship in glossy white (or black).

No word on price, of course, but if you’re getting an iPhone, you’re probably going to want this too.