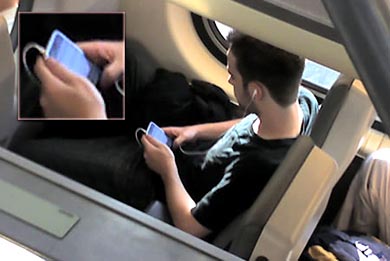 While we are still ten full days away from the official launch of the Jesus phone (as some have called it), the Apple iPhone is already making its rounds in the wild as evidenced by this spy shot captured by a rogue photographer. Apparently, while AT&T stores cannot officially sell the device until Apple gives the go ahead, Cupertino engineers and technicians have been given the okay to take the iPod-cum-mobile phone for a road trip or two.

According to New Launches, “a number of AT&T technicians use the iPhone but a strict check is kept on them as they are not allowed to travel overseas with it.” Obviously, they’re not allowed to sell the highly sought after device either and if any of them are caught posting pictures or videos on the web, “they would pay with their jobs.”

Then, the question remains, who is this lucky bugger riding a train to who knows where and what gives him the nerve to openly flaunt the iPhone to everyone like that?