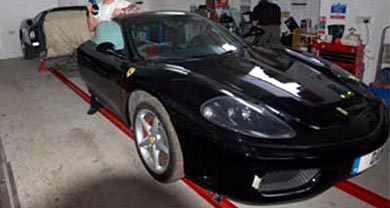 You know, I can’t even begin to fathom why someone would even consider doing something as outrageous as this, because it basically defeats the whole purpose of buying a Ferrari in the first place. It’s not like you’re buying a Maybach, because those are cars that you are meant to be driven in. The fine Italian stallion known as the Ferrari 360 Modena, on the other hand, is a driver’s car. It’s one that you want to get behind the wheel of yourself, one for which you’d give up your first born child just for a few moments around the test track.

But alas, that’s not what was in store for this particular Ferrari. Instead, they cut it up, tore it out, and absolutely butchered the fine supercar until it was barely recognizable. Below are a series of videos outlining what exactly happened to the 360 Modena, followed by a few road tests to see how it handled.