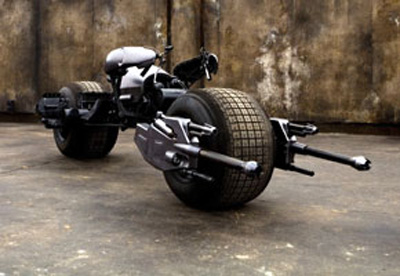 Despite what this might look like, it’s not standard issue for Iraqi patrol commanders or Arnold Schwarzenegger’s next commuter vehicle. No, this is the Batpod, from the upcoming sequel to Batman Begins, the recent movie that delved more than any previous film incarnation of the Caped Crusader into how he became the Dark Knight.

This movie will feature more of Batman’s beginnings, including a backstory involving the Joker, the other focal point of 1989’s Batman. Batman gets the fancy vehicle here, with cannons blazing from either side of this sleek cycle, a worthy companion to the first movie’s Tumbler. Batman is all about the gadgets, especially since he’s a hero but not a superhero with superhuman powers. Superman can fly, but Batman has to go under his own power, or on an exciting pair of wheels.

Look for The Dark Knight in theaters next summer. You can expect to see more photos as the weeks go by.