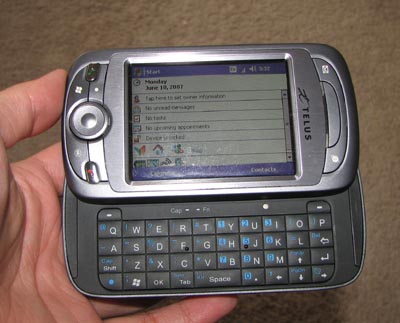 These toys never stop rolling in! I just got my hands on the LG Cherry Chocolate Phone a few days ago and I already got another review lined up for you guys. This time, we head on over to Canada’s other CDMA provider to find the HTC P4000, which is remarkably similar to the HTC TyTN from Rogers Wireless and the Cingular/AT&T 8525. In fact, from a cosmetic point of view, the P4000 looks a lot like the HTC Mogul launched by Sprint in the States. Too bad the P4000 runs on Windows Mobile 5 instead of WinMo 6.

In case you missed it the first time around, the HTC P4000 comes equipped with high-speed EVDO connectivity, a 2.0 megapixel camera, Office synchonization, built-in 802.11b/g WiFi, and Windows Mobile Media Player. If you sign up for a three year contract (and a qualifying voice/data plan), you can nab the HTC P4000 for only $200. No data plan? Then it’s $350.