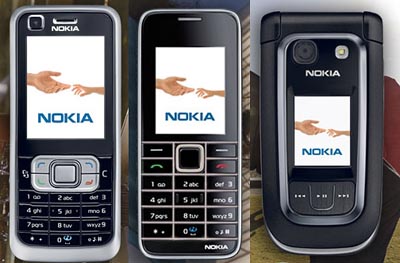 Nokia has an excellent reputation when it comes to the user interface and reception that their phones provide. They’re banking on that reputation with their three latest offerings, all of which shoot squarely in the middle of the mid-range. The features that the 6121 Classic, 3500 Classic, and 6267 clamshell (left to right) provide are better than the entry-level stuff, but they’re far from being jaw-dropping.

Take the Nokia 6121 Classic, for example. It has a conventional candybar form factor to go with its 2 megapixel camera, 4x digital zoom, flash, and panorama mode. A 3G world phone, the 6121 has also got quad-band GSM radios, dual-band WCDMA (900/2100) radios, and a secondary camera for video calls. Expected retail price is 260 Euros ($356).

The 3500 Classic, as its model number implies, is even less exciting. I appreciate its outward appearance more than the 6121, but this phone lacks 3G. The 135 Euro ($180) phone does come with an FM radio, 2 megapixel camera, and 3 hours of talk time, however.

Last but not least is the only clamshell of the bunch, the Nokia 6267. Like its two compadres, it too has a 2 megapixel camera. Other key specs include 3G connectivity, memory card expansion up to 4GB, 6.5 hours of talk time, and dedicated music keys. Look for this one to sell for 240 Euros ($319).