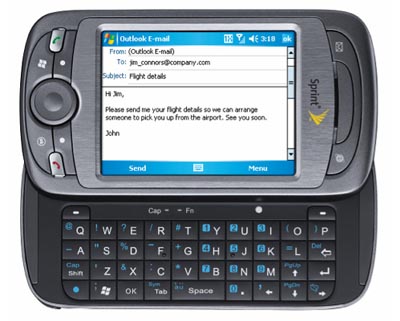 You’ve got to hand it to the folks at HTC. They’ve certainly got a way with naming their devices, and the HTC Mogul (PPC-6800) destined for Sprint is no exception. Like so many other HTC Pocket PC phones, the Mogul comes with a slide-out QWERTY keyboard. Unlike many of their recent offerings, however, the Mogul’s keyboard comes out the right like the Wing, rather than out the left like the TyTn. It’s one powerful handheld, and some may say that it’s “the best slide out QWERTY phone yet.”

To set it apart from similar devices being offered by other carriers, Sprint has tossed in some of their own flavoring with the HTC Mogul (PPC-6800). There’s the Sprint Music Store, of course, as well as “on-demand sports, weather, news, movies, and various Handango applications customized for the provider.” Price has been set at $399.