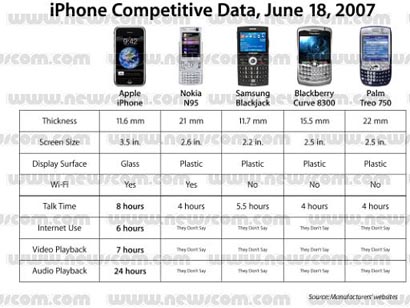 In an attempt to squash the rumors that the iPhone will come with exceptionally poor battery life, Apple has fired back with a claim that the Jesus phone will provide up to 8 hours of talk time. Based on the comparison chart that they provide — obviously, there’s no bias here, right? — it is among the very best in its league, providing double the talk time of such popular handsets as the Nokia N95, Blackberry Curve 8300, and Palm Treo 750.

The chart also reveals several other advantages that the Apple iPhone has over these competitors. For example, the 3.5-inch display is by far the largest of these other handsets (though they fail to include phones like the HTC TyTn). The iPhone is also the only one with a glass display; the others are plastic.

Other numbers that the Cupertino crew are throwing around in regards to the iPhone include 7 hours of video playback, 6 hours of Internet use, 24 hours of audio playback, and 250 hours of standby time. The key with these figures, however, is that they are all part of the “up to” crew, so there’s no saying how well they hold up under real world conditions. That is, until everyone gets their hands on one on June 29.