This one is hot off the press, folks. Sony Ericsson held a press conference on Thursday announcing no fewer than six new phones and a Bluetooth watch. The beauty of it all is that they’ve tackled just about every major form factor known to man. The only things they’re missing are a QWERTY smartphone a switchblade-style swivel phone. There’s nothing completely out of the ordinary from these six new mobile phones, but that’s not to say that they’re easily ignored either.

The K850i follows in the same tradition as the K800i and K810i, but improves on them in just about every way. The most notable change is that this phone boasts an incredible 5 megapixel CyberShot camera. Accompanying this picture-taking behemoth is a xenon flash, PictBridge, HSDPA, and a 2.2-inch 262k color display. The keypad is certainly on the strange side of things because the four directional buttons (if you can even call them that) surround the 2 and 5 keys.

The W910 slider phone boast high-speed HSDPA, a 2 megapixel camera, and the Walkman 3.0 media player software. It’s also got what Sony Ericsson calls “Shake Control”, wherein you shake the phone to skip tracks backwards and forwards. The W960 candybar is a full featured smartphone with Symbian UIQ 3.1. Key features include a 3.2 megapixel camera, UMTS, a 2.6-inch display, and integrated WiFi. I personally feel that the W960 is the sexiest of the bunch.

The lower end K530 has a not as impressive 220×176 color display, but it does feature 3G connectivity, Sport Tracker, and PictBridge/BestPict/Photo Fix. The two other entry-level handsets are the Z250 and Z320 clamshells with VGA and 1.3 megapixel cameras respectively. Last but not least is the Montres Bluetooth watch: no specs were released for this product. 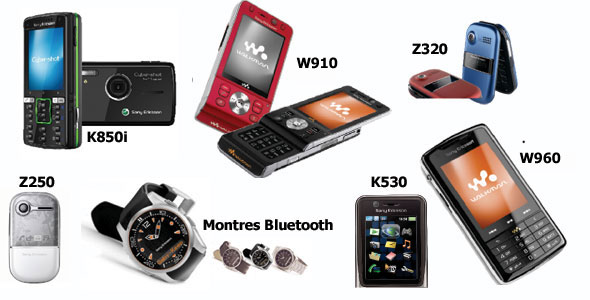