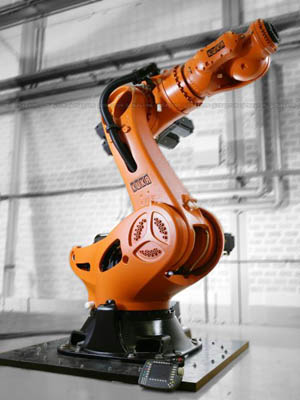 German efficiency and determination have produced the world’s largest and strongest robot, the KUKA KR 1000. It’s full-on huge, with a height of just over 4 meters and a reach alone of 3.2 meters. The robot, aptly called Titan, has nine motors built into a dynamic yet rock-solid steel base.

This kind of machine is obviously built with huge jobs in mind, such as building bridges and lifting train cars and things like that. Those nine motors give the robot the power of a mid-sized car. At a recent demonstration, the robot was able to transport 1000 kilos (454 pounds). Scientists have also successfully used the Titan to lift massive sections of concrete staircases.

This is the kind of robot that will be used to build cars, actually, as well as perform multiple tasks every day in foundries. It also has a place in the Guinness Book of Records, as the largest and strongest robot yet invented.