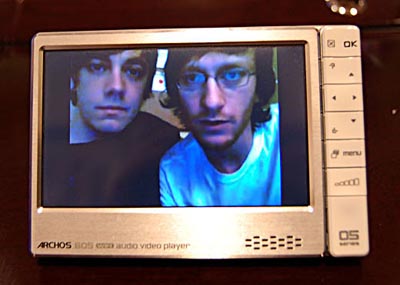 Archos has just formally announced its fifth-generation portable media players. The Archos 105, 405, 605, and 705 are all supposed to offer significant improvements over their respective predecessors, but I’ll hold out on any sort of verdict until I have these in my hands to compare.

105: I reviewed the Archos 104 a long while back and I concluded that despite being hard drive based, it was a reasonable albeit not outstanding alternative to the iPod nano. With the Archos 105, they’ve stuck with an OLED display (160×128, 1.8-inch) and nano-sized proportions (3 inches wide, 1/3-inch thick). Look for it this fall.

605 WiFi: I didn’t have a chance to play with the 604 WiFi, but I did fondle the Archos 604 when it hit the market. Well, they’ve followed up with a series of improvements. The Archos 605 is cheaper and slimmer than its predecessor, and it’s also got a “gussied-up user interface.”

705 WiFi: This is the big kahuna. The display is a giant 7-inch widescreen with an incredible 800×480 resolution. The video is supposed to be so sharp that “your mom will think it’s HD.” Two capacities will be available at launch: 80GB and 160GB.