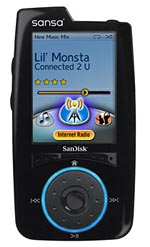 I know. It’s a pain having to go through that whole transcoding process just so that you can enjoy DivX movies on your MP3 player. No longer, my friends, no longer. Word on the street is that certain Sandisk Sansa players will soon receive native support for the DivX format, meaning that you can plunk in that DivX file as is. No converting, no mess.

Details are pretty slim at this point, but given that this came via a press release, it’s pretty darn official. Apparently, the world’s largest maker of flash memory (that’s Sandisk) is in the process of inking a licensing deal with the team at DivX. Good times to come. Good times.