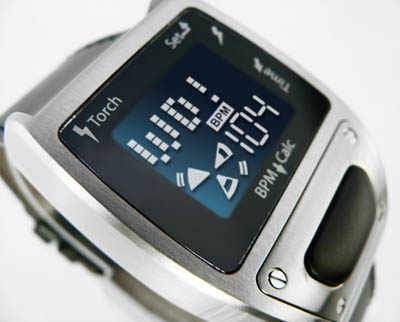 Simple yet functional. That describes the latest watch from Tokyoflash.

Unlike some other watches that aim to give you every kind of information under the sun, the Equalizer BPM tells the time, gives you an LED flashlight, and also displays beats per minute. This BPM feature can learn from data you give it: Just tap the button five times in a regular rhythm and the watch will take over from there, keeping a regular interval between beats much like a musical metronome. That LED mini-torch, as it’s called, will come in handy, being able to seen in low light, unlike many others, which require darkness.

If you’re looking for a much flashier watch, then you’ll want to look elsewhere; however, the BPM function can be very useful, and it’s a good add-on for just US$65.