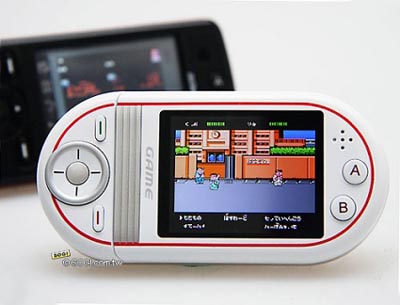 The legal issues surrounding the downloading of ROMs is quite the touchy issue, but you’ve got to marvel at what is capable with technology these days. It used to be quite the endeavor for homebrewers to create NES emulators for their computers. And then they created emulators to work on the Nintendo DS and even the Sony PSP. Now, they’ve gone one giant leap forward.

This portable handheld will not only act as your means of communication — it’s a cell phone — but it’ll also play every NES game ever known to man. That’s because this N-Gage killer has a built-in NES emulator and presumably enough space to stash at least a handful of ROMs. Relative to today’s technology, these ROMs are tiny.

What’s more, this totally awesome handheld gaming and calling machine comes equipped with TV-out and an integrated camera too. Unfortunately, there are probably no plans to bring it State-side. That’s not to say you can’t try to import it though.