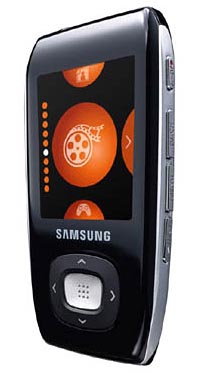 It’s not enough to just play music music anymore. Samsung has once again upgraded its DAP line with the announcement of the T9+. The newest addition is the ability to play games “with any of the devices within a 30-foot radius.” In some ways, this is similar to the WiFi capabilities of the Microsoft Zune, except you’re sharing the joy of a cheesy Java game instead of a song that can only be played three times.

This whole generation started with the original Samsung T9, which can be considered pretty basic by today’s standards. The second-generation T9B added Bluetooth to the mix, letting you use wireless headphones for cable-free head-bobbing. The Samsung T9+ retains all the features of its predecessors and will be available in 2GB, 4GB, and 8GB flavors.

The Samsung T9+ MP3 player is available in Korea right now. An American version — with English menus and games — will likely present itself in the near future.