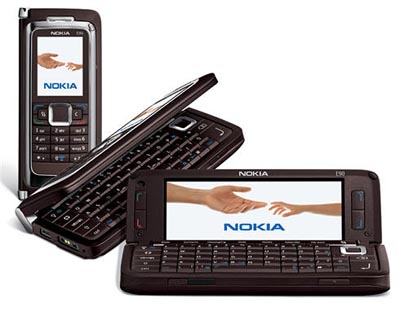 In my ongoing quest to determine whether I should make the jump to PDA phones, I’m exploring all the options. I’m probably most interested in an HTC sliding QWERTY phone of some kind, but if my budget allows, then this compact wonder from Finland could certainly be in the cards. The highly anticipated Nokia E90 communicator launches this week, with the initial shipments — “in small quantities” — being earmarked for Finland only.

Later shipments will go to Indonesia, and then after that, they’ll start sending some of the dual-screened, flipping QWERTY craziness to their Swedish neighbors in August. At this time, there are no firm plans for sending the E90 communicator to any other countries. Antti Vasara, General Manager of Nokia’s Mobile Devices Business Unit, says that the reason why they’re restricting the launch is that the E90 is a “complicated piece of equipment and hard to product in large quantities at first.”

An interview with Mr. Vasara also revealed that the company is taking a “wait and see” approach to touchscreen phones, because they’ve found that customers “don’t like to learn using new shapes and form factors.” That said, Nokia does plan on “launching entirely new type of mobile next year.”