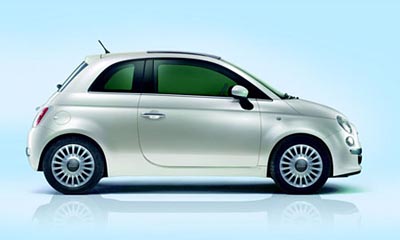 Fuel prices are rising and it’s getting increasingly more expensive to maintain our gas-guzzling ways. That’s why smaller, more efficient cars like the Toyota Yaris have been so darn popular. But even the Yaris is a giant compared to the Fiat 500 microcar. A midget among the car market, the Fiat 500 microcar may be due to arrive in American showrooms “sometime next decade.”

It won’t be the city car version that putts its way around Europe. Autoblog is reporting that “we’re more likely to be blessed with the Abarth 500.” The turbocharged 1.4L inline-four powerplant under the hood of that sporty number outputs between 120 and 135 horsepower.

Too miserly for you? Well, there are rumors floating about that the American version will get 150hp instead so that it can compete against BMW’s Mini (and the VW Rabbit).