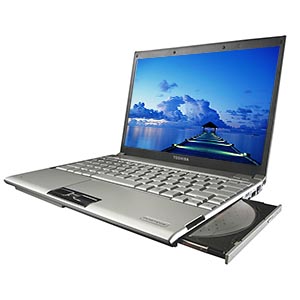 I always enjoy these claims of having the world’s fastest this or the world’s skinniest that, because they always come with some sort of caveat. In the case of the newly announced Toshiba Portege R500 series laptop, for example, the company is saying that is the world’s thinnest notebook series with an integrated optical disk drive. So, it’s not necessarily the thinnest laptop, but it is the thinnest laptop series. And you’re not allowed to compare it to portable computers which lack optical drives. Despite these limitations, it’s still very, very impressive.

Measuring only 0.77-inches thick, the Toshiba Portege R500 is also remarkably lightweight at just 2.4 pounds. But that’s not to say that it’s a slouch in the performance department. The compact 12.1-inch widescreen “incorporates an indoor/outdoor transflective LED backlight” to ensure optimal visibility at all times.