HTC is really starting to get serious about penetrating the North American market under their own banner, because they’ve recently launched no fewer than three smartphones for two of Canada’s largest mobile providers. The best part is that all three devices sport HTC’s signature slide-out QWERTY keyboard, making them perfect for text message junkies and business power users alike.

From Rogers Wireless comes the HTC TyTN, based on the HTC Hermes platform. Fundamentally identical to the Cingular AT&T 8525, the Rogers Wireless take on the TyTN is powered by Windows Mobile 5.0 Pocket PC Edition, boasts a large 2.8-inch touch sensitive display, rocks high-speed HSDPA and WiFi for wireless data, and it’s even got a 2 megapixel camera and integrated music player for entertainment on the go. The price is a little scary, though, at $399 with a qualifying three-year contract.

Telus Mobility, one of Canada’s two major CDMA providers, has not one, but two new HTC devices added to its portfolio. First up is the slightly cheaper HTC S720. Powered by Windows Mobile 6, the S720 (based on the HTC Vox platform) may appear like a regular candybar by day with its standard numerical keypad, but in typical HTC fashion, it’s got a QWERTY keyboard that pops out the side. Data comes by way of high-speed EVDO, whereas the rest of the features include a QVGA TFT display, 64MB RAM, 128MB ROM, Windows Live integration, 2.0 megapixel camera with 2x digital zoom and video, Bluetooth, and microSD expansion. The HTC S720 is $150 with a three-year.

The other device from Telus Mobility is closer to the TyTN offered by Rogers. The HTC P4000, also based on the Hermes platform, latches onto the Telus EVDO high-speed network, but it is also “the first EVDO Rev.A capable smartphone in Canada.” Too bad Telus Mobility doesn’t have their Rev.A stuff ready to go just yet. The rest of the stuff is pretty much what you’d expect with Windows Mobile 5.0 for Pocket PC, Office synchronization/viewer, 2.0 megapixel camera, built-in WiFi, and Windows Mobile Media Player. Interestingly, when you sign up for a three-year service agreement, the price is half that of the TyTN. The Telus-branded HTC P4000 is just $200.

If anyone from Telus or Rogers is reading this, I will gladly review any of these devices, because I’ve been itching to get into the WinMo foray, especially when lovely HTC sliding QWERTY keyboards come into play. 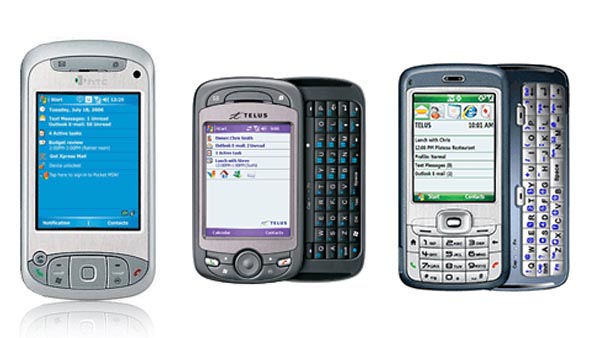