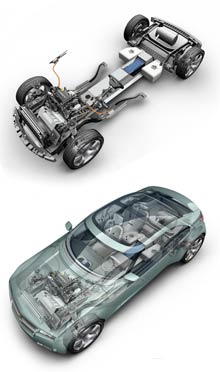 General Motors is apparently determined to not kill the electric car this time around, announcing plans for two companies to make batteries for the aptly named Volt. Michigan-based Compact Power and Continental Automotive Systems, in Germany, have gotten the nod to go ahead and build battery-pack designs that can last a decade or so.

The announcement of the Volt, by GM in January, is a bit of an about-face from the world’s No. 1 automaker, which had said it was committed to hydrogen much moreso than electricity. But times change, and even GM changes with the times.

Designs for these batteries differ so far, and the American and German companies will no doubt refine the process further in the next year or so, before the target date. What kinds of refinements and enhancements need to be made might depend on the availability of cobalt, one of the prime ingredients in lithium-ion batteries. Compact Power is already working on alternatives, which would seem to give them the inside track, especially since they’re right down the street, relatively speaking.

Then there’s the question of weight, since an electric battery might need to include more cells (and, consequently, a big more weight) in order to protect against energy loss and, more importantly, overheating. Increases in weight in the battery pack will naturally affect performance, in handling, in gas mileage, and in overall wear-and-tear.

It’s a brave new world for GM but one that they’re determined to inhabit. A decision on the battery supplier will be made in June 2008, and the Volt is expected to appear on the market perhaps as little as one year later.