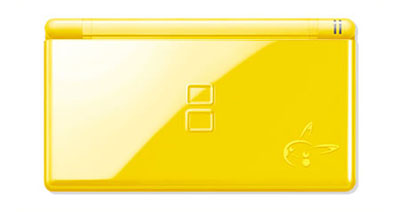 Pika…Pika… Pika… CHU!!!!! The fascination with Pokemon has just a whole new level, because here is the official Pikachu limited edition Nintendo DS Lite. It will be much more rare than the recently revealed silver and pink portable gaming machines. This is for a couple of reasons.

First, they’re only issuing the taxi-colored DS Lite out in Japan. Second, they’re limiting production to an unspecified number and then they’re not making any more. What’s more, it’s not like you can just waltz into a Japanese retailer and hope that they have a Pikachu-themed Nintendo in stock. Nope, gamers actually have to “fill out forms at one of five Pokemon centers in Japan which will give them a chance to buy the special DS.” Yes, just a chance.

Thankfully, the Nintendo DS Pikachu Edition isn’t that much more than a regular one. Price has been set at 16,800 Yen, which works out to about US$140.