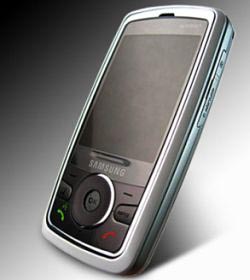 Let’s see here. On the surface, the newly announced i400 looks like any other sexy Samsung phone with its slim profile and sliding form factor, but delve a little deeper and you’ll discover that this isn’t just any phone. It’s a smartphone.

Powered by Symbian S60, the Samsung SGH-i400 has the same undeniable appeal as the Ultra Edition series, but it’s also got a heck of a lot more functionality to it, thanks to the Symbian-ness. You also get all the latest toys like a 2-megapixel camera, music keys, stereo speakers, a 2.3-inch QVGA display, Bluetooth 2.0 (with A2DP), GSM/GPRS/EDGE, and a microSD expansion slot good for up to 4GB of extra space.

No word on price — it won’t be cheap — but the initial plan is a launch in Russia by June 2007, with the rest of the European market following shortly afterwards.