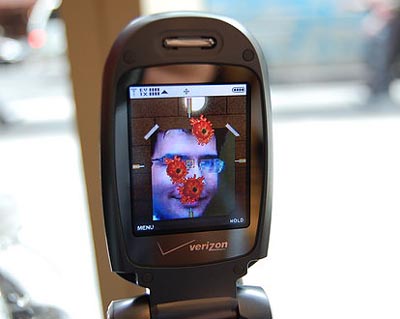 Gosub 60 is jumping all over the motion-sensitive bandwagon with their latest cell phone game, Camera Phone Darts. Instead of an accelerometer embedded into your handset — most of us don’t have phones with that kind of technology — this game makes use of what the camera on your phone sees. The GestureTech software “senses motion the way an optical mouse’s sensor does, though the emphasis is twisting rather than linear tracking.”

On your cell phone’s screen, you’ll be presented with the picture of a dart board, essentially placed on a virtual wall in front of you. You move your phone around (or rather the camera on the back) until the board is centered on your display, and then you tap “OK” to let the dart fly. It appears to be ridiculously intuitive.

When you get tired of throwing darts, there’s also the option to snap a photo with your camera and then throw tomatoes at it, as shown in the picture provided to the right. They expect most carriers to pick up Camera Phone Darts by early June. It’ll probably go for $2.99/month or $7.99 unlimited.