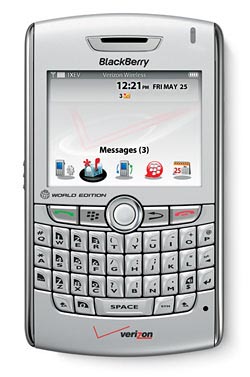 The two-way CDMA/GSM “World Edition” BlackBerry 8830 is set to debut on Verizon Wireless on May 14, beating Sprint to the punch by a solid two months. As I reported earlier today, Sprint also plans on releasing the BlackBerry 8830, but they’re not doing it until early July.

To get your hands on this device — which uses the regular Verizon CDMA service while at home, but it also rocks an unlocked SIM slot where you can plug in international cards for use in other countries (900/1800 only) — you’ll need to go through either the “business units” or the online store starting May 14. If you’d prefer to hit up the kiosk in the mall, you’ll have to wait until May 28.

Verizon’s take on the BlackBerry 8830 is much the same as Sprint’s with the microSD slot, media player, QVGA display, and lack of camera, but it seems that Verizon is going with silver rather than the black. The Verizon Wireless BlackBerry 8830 World Edition will sell for $299.99 after a $100 rebate a new two-year contract. You can knock an extra $100 off of the price if you sign up for a “qualifying” plan.