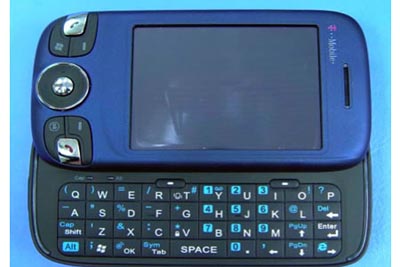 Look what we found fluttering about at the ol’ FCC offices, complete with prominent T-Mobile badging. Why, it’s the T-Mobile Wing, the Windows Mobile 6 device perhaps better known to some folks at the HTC Herald or HTC P4350. Like so many other HTC-created smartphones before it, the T-Mobile Wing also features a sideways-sliding QWERTY keyboard, an automatically-orienting color display, and possibly most thankfully of all, integrated WiFi connectivity. Other wireless radios include Bluetooth and EDGE.

On the downside, the camera is just a 2 megapixel unit, but at least it’s got MyFaves support. It’ll easily tackle the Sidekick 3s of the world, except there is much more of a business focus on this device, despite its bright blue exterior. I’d say that the T-Mobile Wing will compete directly against the HTC Hermes-based Cingular 8525.

In any case, now that it’s jumped (flown?) through a few hoops at the FCC, we can fully expect an announcement from T-Mobile regarding availability of Wing some time soon.