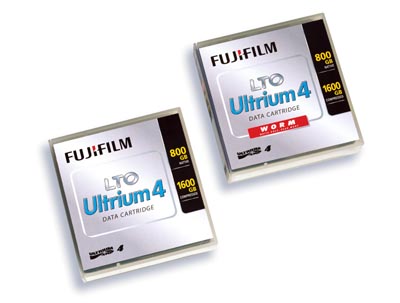 With all this talk of solid state flash drives (SSD) and expanding the size of small hard drives (HDD), it seems that this alternative has been largely lost in the mix. Fujifilm has just announced that they have started mass production of Linear Tape-Open (LTO) Ultrium Generation 4 data cartridges. To be available worldwide on April 30, these LTO Ultrium cartridges (I must have missed the first three generations) feature a native capacity of 800 gigabytes with transfer rates as high as 120 megabytes (MB) per second. That’s a lot of space and a lot of speed.

Originally (and still) intended largely for enterprise solutions, these data cartridges also feature the Advanced Encryption Standard (AES) 256-bit encryption “to keep data secure.” This level of security is necessary for any kind of “Top Secret” information held by the U.S. Government. One variation of the cartridge comes with WORM (Write-Once, Read-Many) capability. Because the data is non-rewriteable, you can be sure that the original remains intact and untouched.

Future iterations of the LTO Ultrium data cartridges will double the capacity with each generation, just as they did when going from Gen 1 to Gen 2, Gen 2 to Gen 3, and now Gen 3 to Gen 4. The terabyte range is well within grasp.