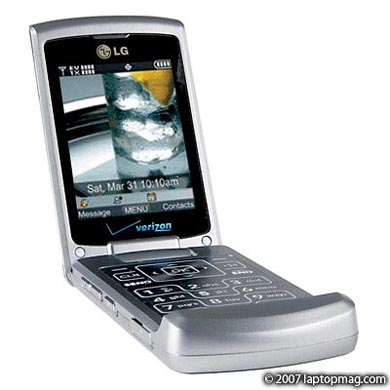 Some people may think that the newly released LG VX8700 from Verizon Wireless is just another RAZR clone, but the reviewers at Laptop Magazine think it’s much more than that. In fact, they’re saying that it’s “by far the most attractive phone in Verizon Wireless’ lineup.”

Key features include a shiny metal finish, stereo Bluetooth, a sharp two-megapixel camera capable of recording QVGA (320×240) video at 15fps, and an external three-line color LCD that doubles as a tiny mirror when it’s off. Thanks to the high-speed EVDO connectivity, streaming multimedia accessed through the V CAST service is an absolute dream as well. One of the complaints that the reviewers had, however, was that the microSD slot was difficult to access: you have remove the battery to get at it.

Overall, they say that the “VX8700 is worth $50 more [than the VX8600 Chocolate flip] for those looking for a combination of high style and substance.”