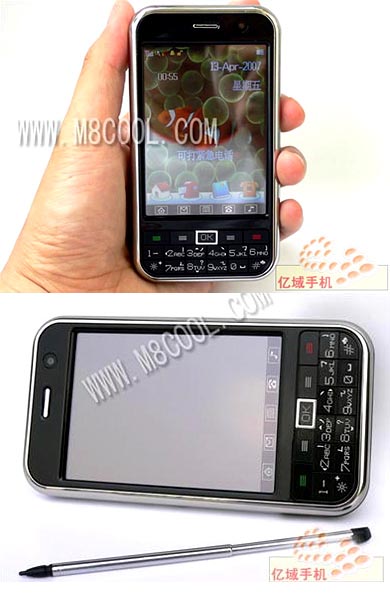 We’re about two months away from the official launch of the Apple iPhone, but the Chinese market is already getting flooded with all sorts of knockoffs and clones. The latest in this line is the IP2000. Unlike the real iPhone, however, the IP2000 actually has a functional numeric keypad underneath the screen, allowing you to make voice calls in a more conventional kind of way. The reasoning behind this? Well, touchscreen functionality on the 3.5-inch TFT display does not come standard, despite what the included stylus may lead you to believe. (It appears to be an option.)

The rest of the goods sound about right. You get at 2.0 megapixel camera, presumably with flash and video, as well as an integrated media player. We’re not sure how much memory is found inside, but if I were to venture a guess, it’s probably less than a gig with some sort of memory expansion slot backing it up (unlike the real iPhone).

The IP2000 manages to capture the look of the iPhone quite well. The designers even took the Apple motif one step further by surrounding the camera lens with an Apple. Like that’s going to fool anyone.