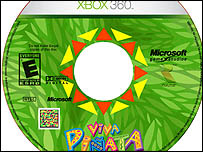 DVDs and Xbox games will have color bar codes later this year, according to Microsoft, developer of the expanded memory capability. The patterns will have four or eight colors and will be able to hold double the amount of data of commonly accepted black-and-white barcodes. The total number of alphabetical characters of data that can be crowded into a square inch of the new multicolor triangle-dominated barcode is 3,500.

Microsoft officials went out of their way to say that they weren’t out to replace the current UPC bar codes. The color bar codes, though, will be able to be accessed by mobile-phone cameras and webcams.

It’s the same sort of mobile Web promotion and packaging that we’ve been hearing about for awhile. The difference here is that Microsoft is behind it.

An anti-counterfeiting nanoparticle will be part of the code as well.