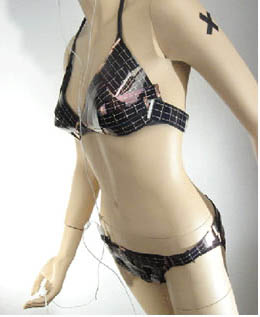 You kind of have to see this to believe it. We’re not sure that this is the same sort of gadget holder as that pair of holsters that we told you about a few weeks ago. This device seems more like someone’s idea of a new outfit for a fashion show or something. Nonetheless, what you’re gazing at in that photo is the Solar Powered Bikini. It’s a two-piece bikini with photovoltaic film strips attached strategically to various parts of the clothing, so that you can charge your gadgets while you’re catching some rays. Better yet, the charging takes place via those rays.

The solar panels are scattered along both the top and the bottom of the suit. Total charging power is 6.5 volts at 1.5 amps, which is more than enough to breathe new juice into the standard cell phone.

OK, you can pick your jaw up off the floor now. This is just a concept. It’s from the … creative mind of American designer Andrew Schneider, who thoughtfully included a USB connection on one of the bikini’s hips.