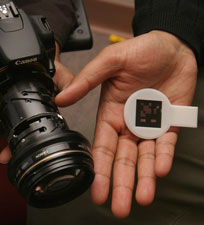 Digital photography is very popular these days, perhaps more than ever. Yet the pell-mell nature of everyday life often makes the actual taking of photos rushed as well, with the result being a raft of blurry photos that get deleted because there’s no way to fix them. Alternately, you depend too much on the camera’s autofocus, which zooms in on something other than what you chose as your focus. Either way, you end up chucking image files in the virtual trash.

Well, now there is—or at least there will be, soon. The bright folks at Mitsubishi Electric Research Labs have come out with a camera that boasts a coded aperture mask that can manipulate with a picture’s depth of field after the photo has been taken. That’s high-power stuff.

The mask that the scientists have created reconstructs a four-dimensional light field, which allows for refocusing of images within the camera. The mask rests between the camera’s lens and sensor, perfectly poised to intercept that blurriness (intentional or not) and make it right before the photo is “real.”

(By the way, we have heard of a little product called PhotoShop. We do know that other image enhancement software exists. The Mitsubishi scientists says that their process is actually superior to such software’s subroutines.)

This is exciting technology, and we can only hope that it makes it into the mainstream imaging market relatively soon. We’d love to see it capture more than just our imagination.