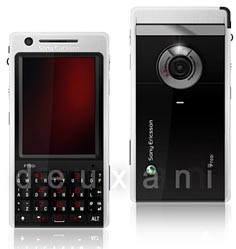 Sony Ericsson has done a wonderful job with addressing every segment of the market, from the near feature-less entry-level handsets to cell phones catering to music lovers, shutterbugs, and business users alike. The recently spied Sony Ericsson P700i smartphone is catering to power users who not only seek high-end functionality, but also high-end looks.

None of this has been officially confirmed by SE just yet, but word on the street has it that the P700i will rock a two-letters-to-each-key thumb board, a 3.2 megapixel camera with duplex LED, and a large 2.6-inch QVGA display. High speed data transfer is a breeze with a trio of wireless radios, including 3G, WiFi, and Bluetooth. The two-toned appearance will almost certainly turn a few heads too.

Now we just have to find out how much it costs and when it’ll ship. Because I want one. C’mon, Sony Ericsson, ship one my way. I promise I won’t tell anyone.