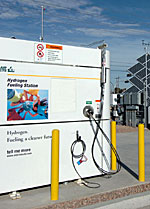 You certainly do think of the Sun when you think of Las Vegas. Sin City was built on a desert, so it has plenty of sunlight that can be translated into solar power. Pursuing the promise of solar power is the Las Vegas Valley Water District, which has opened a solar-powered hydrogen filling station. That’s right, the Sun powers the source of the fuel of those hydrogen-powered vehicles.

We like this as an idea. Hydrogen certainly looks to be a fuel of the future, as more and more focus is put on alternatives to petroleum and other fossil fuels. The Las Vegas Water District reports that 77 percent of its vehicles are hybrids.