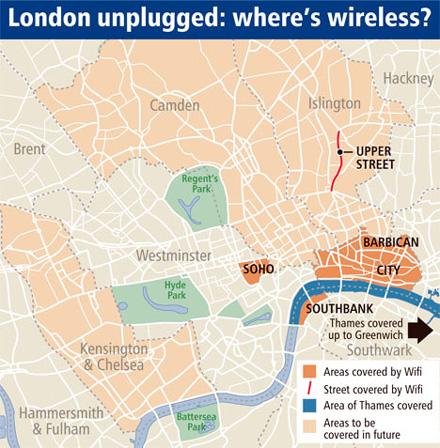 The land of Shakespeare, Newton, and King Henry VIII is about to beget Europe’s largest hotspot. Yes, the entire city of London is going to be blanketed in base stations—130, to be exact—resulting in a mesh networking scheme that will grant hundreds of thousands of people roaming and wire-free Internet access.

London isn’t Mountain View, however, and users will have to pay the not insignificant fee of 11 pounds a month to use the service. Google’s home base cloud gives its home city’s users free and unfettered Internet access; the same will not be able to be said about London. The populations are nowhere near similar, however.

The rollout will be in stages, as this rather large map shows, and apparently you can even have access while you’re meandering down the Thames on your Midsummer Night’s Dream cruise.