Unfortunately, we will not be seeing a Porsche Carerra GT tearing it up on the desert, jumping over sand dunes any time soon, but we will see the next best thing. The 2007 Porsche Cayenne S Transsyberia SUV was inspired by a couple of enthusiastic customers who modified regular Cayennes to attack to the 10,000km-long Transsyberia Rally in 2006.

Porsche thought they were so great that they have now prepared a limited run of at least 26 of these specially-equipped vehicles to attack the 2007 rally. Naturally, these are no regular Cayennes. They come with a “Special Offroad Mode”, which allows the vehicle to get submerged in water as deep as 30-inches. This is because there’s a “roof-mounted snorkel” that keeps water out of the intake manifold.

Other rally-specific mods include reinforced A and B pillars, a bolted-in safety cage, underbody protection, a handbrake (instead of the foot-operated parking brake), rerouted electrical system, lightweight sport exhaust, offroad tires, roof lights, stripped interior, and dual spare tires. You still get leather seats though. Powering the beast is a 4.8L V8 good for 385 horsepower.

Taking place between August 2 and 17, the 2007 Transsyberia Rally starts in Moscow, crosses Siberia, and ends in Ulaanbataar, Mongolia, covering over 6,600 kilometers along the way. 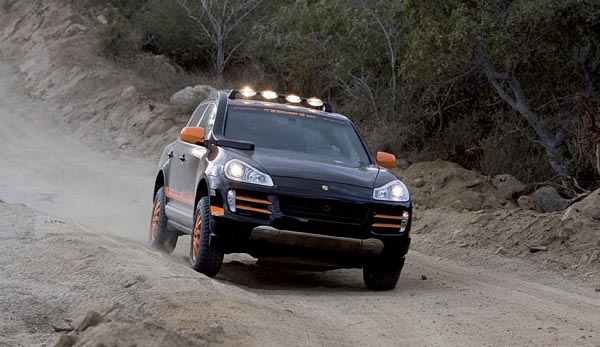