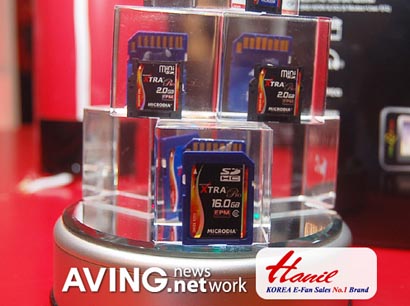 I’m not entirely sure what makes these flash memory cards by Microdia so “professional” other than the fact that they pack on loads of storage in such tiny packages. The XtraPro Series “is professionally designed for high performance and superior reliability”, and as such, they are particularly well suited for users of digital SLR cameras and other high-end equipment.

The read/write speed has been rated at 160x, which is equivalent to a data transfer rate of about 24MB/sec. This is useful for cameras with high megapixel counts as it means that you can quickly move on to the next shot without having to wait for the previous one to finish being written to the card.

In this line “made for serious professional photographers”, Microdia is including a 2GB miniSD card (for high megapixel camera phones?) as well as a 16GB SDHC card. They will likely add more cards to the XtraPro series as well.

No word on pricing.