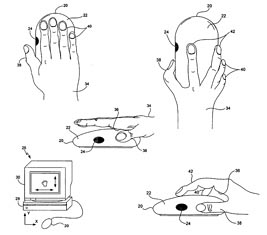 One of the complaints that people have against the current Apple Mighty Mouse, despite is svelte presence, is that the little nipple of scroll wheel is not exactly the best mechanism out there. Not only does it take away from the ultra smooth appearance, that small nub also has a habit of collecting dust and dirt. The Cupertino crew may have heard your cries, because the next-generation Mighty Mouse is rumored to have touch-sensitive housing that will let you scroll by simply gliding your finger across the surface.

What’s more, they say that the little rodent pointer will react differently, depending on how you hold it. The iPhone isn’t the only thing coming out of the Apple camp with a touchy interface, it seems. It’s still a rumor at this point, but if these patent sketches are to be believed, it’s a very good rumor and one that will be welcomed by many Mac users.