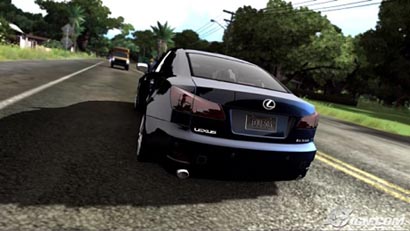 Some of these cars aren’t even going to hit showrooms until later this year, but you can take the new Lexus GS 450h hybrid-powered luxury sport sedan and the Lexus LS 460 premium luxury sedan out for a spin right now. Yes, as in right now. Well, at least the virtual kind of the car anyways, because Atari has announced that the new “Lexus Car Pack” is available for free download on the Xbox Live Arcade Marketplace, granting you access to several new Lexus cars in Test Drive Unlimited for the Xbox 360.

In addition to the two above mentioned luxury sedans, you can expect the SC 430 hard-top convertible and the $100k+ 2008 LS 600h L — the latter of which is “the world’s first full hybrid V8 luxury sedan” — to be hitting up the Xbox Live Marketplace soon as well.

I know, it’s not the same as actually sitting behind the wheel of these ultra-luxurious vehicles, but it’s the closest you’re going to get for a little while. And let’s not forget about the price difference between these free virtual cars and the real thing.