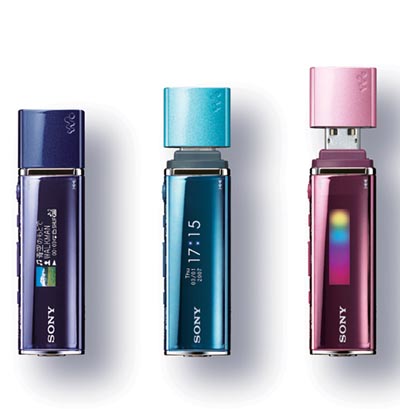 There’s a fair bit of Sony news today with the discussion of the PlayStation Phone and a video preview of the WiFi-touting CyberShot DSC-G1, so let’s go for the trifecta and hit up their music playing department. Sony has just revealed their new E-Series line of Walkman digital audio players, and unlike some of the other DAPs we’ve seen from Sony, the displays on these guys actually have color.

Based on sheer appearance alone, you’d probably say that the E-Series is eerily similar to a number of Sony MP3 players we’ve seen in the past and you’d be right, except the E-Series units comes with integrated USB connectors, making it just a touch easier to synch up your music library. The aforementioned OLED screen hides behind a myriad of “sexy colors”, including gold, black, navy blue, ice blue, and magenta. Other key features include 30 hours of battery life, Clear Audio technology, and your choice of 1GB, 2GB, and 4GB capacities.

No word on pricing or availability at this time.